Oh, those sinless, perpetual victims and universal humanitarians again lavishing their holiness and tikkun olam wisdom on us lesser species… 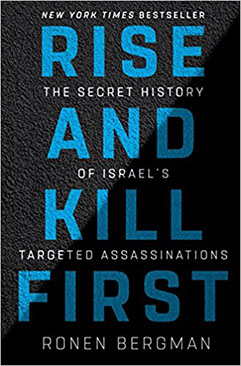 “… Ronen Bergman’s authoritative and exhaustive history of Israel’s targeted killings of its enemies [titled “Rise and Kill First”], which he calls “the most robust streamlined assassination machine in history.” Since World War II, Bergman calculates, the Jewish state and its pre-state paramilitary organizations have assassinated more people than any other country in the Western world — some 2,300 “targeted killing operations,” most of them against Palestinians, but also aimed at Egyptians, Syrians, Iranians and others … In the name of state security, Israeli officials didn’t just walk the line of legality, they trampled it. “Summary executions of suspects who posed no immediate threat, violations of the laws of Israel and the rules of war — were not renegade acts by rogue operatives,” Bergman writes …”

A Secret History of Israeli Assassinations

“… The book [Rise Up and Kill: The Secret History of Israel’s Targeted Assassinations, by Ronen Bergman] catalogues Israel’s six-decade history of “negative treatment” (the Hebrew euphemism for targeted killing operations) against its enemies, which, over time, ranged from fugitive German war criminals and rocket scientists to front-line Arab leaders to Iraqi nuclear officials (under Saddam Hussein) and then scientists in Iran’s nuclear program. And always, of course, there were the Palestinian leaders, and later Iran-backed Hezbollah militants, to be ‘liquidated.’”

Did Israel Kill the Kennedys?

“Using the familiar rationale of "terrorism" to excuse cooperation they knew was illegal, the NSA and ISNU found a workaround using the Office of the Director of National Intelligence that provided the Israelis with all the intel they needed, according to an October 2006 article in the NSA's internal publication.…”