Medieval miniature of the Nativity, c. 1350

Adoration of the Kings, by Master of Perea

In Defense of Christmas

Today’s skeptics, who seem to reject something traditional just because it’s traditional, cannot sit still during the holy season of Christmas without mocking the notion that Christ would have been born on December 25th.  If it were just the unbelievers who engaged in this mockery, it would be expected, since unbelievers, by their very nature, are not expected to believe. More troubling is the fact that, like evolution and all other modern atheistic fantasies, this one has seeped through the all-too narrow wall separating Catholics from the rest of the world.  The anti-Christmas myth, which makes a myth out of Christmas, is being foisted on Catholic children as fact.  To benefit these, and any Christian who respects piety, history, Scripture, and Tradition, we present our defense of Christmas.

Since there is no date for the Nativity recorded in Holy Scripture, we rely on the testimony of the Church Fathers and of history to get an answer to the question, “When did Christmas take place?”

First, let us see the essential significance of the Savior’s birth at the time usually attributed to it. The winter solstice, the astronomical event which recurs every year, is traditionally said to be the birthday of the Messias. To elucidate the meaning of this fact, we will turn to Saint Gregory of Nyssa (+ 385 or 386): “On this day, which the Lord hath made, darkness decreases, light increases, and night is driven back again. No, brethren, it is not by chance, nor by any created will, that this natural change begins on the day when He shows Himself in the brightness of His coming, which is the spiritual Life of the world. It is Nature revealing, under this symbol, a secret to them whose eye is quick enough to see it; to them, I mean, who are able to appreciate this circumstance, of our Savior’s coming. Nature seems to me to say: “Know, oh man! that under the things which I show thee, mysteries lie concealed. Hast thou not seen the night, that had grown so long, suddenly checked? Learn hence, that the black night of Sin, which had reached its height, by the accumulation of every guilty device, is this day, stopped in its course. Yes, from this day forward, its duration shall be shortened until at length there shall be naught but Light. Look, I pray thee, on the Sun; and see how his rays are stronger and his position higher in the heavens: Learn from that how the other Light, the Light of the Gospel, is now shedding itself over the whole earth.” (Homily On the Nativity)

Saint Augustine, a Western Father, concurs with Gregory, the Easterner: “Let us, my brethren, rejoice, this day is sacred, not because of the visible sun, but because of the Birth of Him Who is the invisible Creator of the sun. He chose this day whereon to be born, as He chose the Mother of whom to be born, and He made both the day and the Mother. The day He chose was that on which the light begins to increase, and it typifies the work of Christ, who renews our interior man day by day. For the eternal Creator, having willed to be born in time, His birthday would necessarily be in harmony with the rest of creation.” (Sermon On the Nativity of Our Lord iii) Similar sentiments are echoed by St. Ambrose, St. Leo, St. Maximus of Turin, and St. Cyprian.

To further the beauty of this mysterious agreement between grace and nature, Catholic commentators have shown this to be a marvelous fulfillment of the utterance of St. John the Baptist, the Voice who heralded the Word: “He must increase, but I must decrease.” Literally fulfilled by the ending of the Precursor’s mission and the beginning of the Savior’s, this passage had its spiritual fulfillment in the celebration of John’s feast on the 24th of June, three days after the summer solstice. As St. Augustine put it: “John came into this world at the season of the year when the length of the day decreases; Jesus was born in the season when the length of the day increases.” (Sermon In Natali Domini xi).

Lest anyone find all this Astronomy to reek of paganism, we remind him that in Genesis, it is recorded: “And God said: Let there be lights made in the firmament of heaven, to divide the day and the night, and let them be for signs, and for seasons, and for days and years: To shine in the firmament of heaven, and to give light upon the earth. ” Further, the Magi, those holy men from the East, who came to greet the Expectation of the Nations, were led thence by a star.

“But,” you may say, “the winter solstice is on the 21st of December, not the 25th.” Correct. But if, from the time of the Council of Nicea (325) to that of Gregory XIII’s reform of the calendar (1582), there was a 10 day discrepancy between the calendar and the actual astronomical pattern governing it, then it is entirely possible that a four-day discrepancy had occurred between our Lord’s birth and the Council. We illustrate this possibility as follows: The calendar that many of the Greek schismatics still follow (the Julian calendar), is presently fourteen days off from the Gregorian. This additional four day discrepancy from Gregory’s time has happened over about 400 years.

But now for the meat of the issue: when did it happen? According to St. John Chrysostom, the foundation for the Nativity occurring on the 25th of December is a strong one. In a Christmas Sermon, he shows that the Western Chruches had, from the very commencement of Christianity, kept the Feast on that day. This fact bears great weight to the Doctor, who adds that the Romans, having full access to the census taken by Augustus Caesar (Luke 2, 1) — which was in the public archives of the city of Rome — were well versed in their history on this point. A second argument he adduces thusly: The priest Zachary offered incense in the month of Tisri, the seventh of the Hebrew calendar, corresponding with the end of our September or the beginning of our October. (This he most likely knew from details of the temple rites which were transmitted to him by a living tradition, supported by Holy Scripture.) At that same time, St. Luke tells us that Elizabeth conceived John the Baptist. Since, according to the Bible, Our Blessed Lady conceived in the sixth month of Elizabeth’s pregnancy (the end of March: when we celebrate the Feast of the Incarnation), then she gave birth nine months later: the end of December.

Having no reason to doubt the great Chrysostom, or any of the other Fathers mentioned; in fact, seeing objections issued only by heretics and cynics, we agree with the learned Doctor and conclude that, by God’s Providence, His Church has correctly commemorated the Feast of His Nativity.

Further, as the continuity of the Old Testament with the New Testament was preserved in two of the principal feasts of the New: Easter corresponding to the Pasch and Pentecost to Pentecost (same name in both dispensations), it would have been unlikely for the Birth of the Eternal God into our world not to have had a corresponding feast in the Old Testament. Until the time of the Machabees, when the temple was re-dedicated after its desecration by the Greek Antiochus IV, Antiochus Epiphanes (see 1 Machabees 4). One hundred and sixty-seven years before Jesus, the commemoration was instituted according to what was written: “And Judas, and his brethren, and all the church of Israel decreed, that the day of the dedication of the altar should be kept in its season from year to year for eight days, from the five and twentieth day of the month of Casleu, with joy and gladness.” (I Macc. 4, 59) To this day, Jews celebrate the twenty-fifth of Casleu (or Kislev, as they say) as the first night of Hannukah. This year (5757 in the Jewish calendar), 25 Casleu was on December 12. Even though the two calendars are not in sync, Christmas and Hannukah are always in close vicinity. With the Festival of Lights instituted less than two centuries before Our Lord’s advent, the Old Testament calendar joined nature in welcoming the Light of the world on his birthday.

As for the objection, “Jesus couldn’t have been born in the winter, since the shepherds were watching their flocks, which they couldn’t have done in winter”: This is really no objection. Palestine has a very mild climate, and December 25 is early enough in winter for the flocks and the shepherds to be out. The superior of our monastery, Brother Francis Maluf, grew up 30 miles from Beirut, which has the same climate as Bethlehem, both being near the Mediterranean coast, and he has personally testified to this fact.

The Jews’ War on Christmas here. 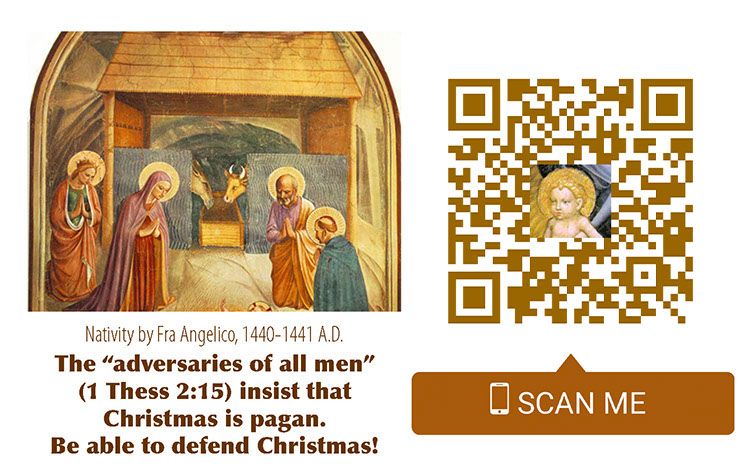