neo-Pharisees • hating the Blessed Virgin Mary, the Saints, and their intercession

Mimicking the talmudic hatred of the Mother of God (see Jesus in the Talmud), the most Biblically ignorant and vicious of Protestants insist that Catholics “worship” the Blessed Virgin Mary. We do not worship her, we honor her exactly as the Bible honors Mary in Luke 1:26-55, the source of her titles, our “Hail Mary,” and Magnificat:

“And in the sixth month, the angel Gabriel was sent from God into a city of Galilee, called Nazareth,  To a virgin espoused to a man whose name was Joseph, of the house of David; and the virgin' s name was Mary. And the angel being come in, said unto her: Hail, full of grace, the Lord is with thee: blessed art thou among women.  Who having heard, was troubled at his saying, and thought with herself what manner of salutation this should be.  And the angel said to her: Fear not, Mary, for thou hast found grace with God. Behold thou shalt conceive in thy womb, and shalt bring forth a son; and thou shalt call his name Jesus.  He shall be great, and shall be called the Son of the most High; and the Lord God shall give unto him the throne of David his father; and he shall reign in the house of Jacob for ever.  And of his kingdom there shall be no end.  And Mary said to the angel: How shall this be done, because I know not man?  And the angel answering, said to her: The Holy Ghost shall come upon thee, and the power of the most High shall overshadow thee. And therefore also the Holy which shall be born of thee shall be called the Son of God. And behold thy cousin Elizabeth, she also hath conceived a son in her old age; and this is the sixth month with her that is called barren:  Because no word shall be impossible with God.  And Mary said: Behold the handmaid of the Lord; be it done to me according to thy word. And the angel departed from her.  And Mary rising up in those days, went into the hill country with haste into a city of Juda.  And she entered into the house of Zachary, and saluted Elizabeth. And it came to pass, that when Elizabeth heard the salutation of Mary, the infant leaped in her womb. And Elizabeth was filled with the Holy Ghost:  And she cried out with a loud voice, and said: Blessed art thou among women, and blessed is the fruit of thy womb.  And whence is this to me, that the mother of my Lord should come to me?  For behold as soon as the voice of thy salutation sounded in my ears, the infant in my womb leaped for joy.  And blessed art thou that hast believed, because those things shall be accomplished that were spoken to thee by the Lord.

“And Mary said: My soul doth magnify the Lord.  And my spirit hath rejoiced in God my Saviour.  Because he hath regarded the humility of his handmaid; for behold from henceforth all generations shall call me blessed.” Because he that is mighty, hath done great things to me; and holy is his name.  And his mercy is from generation unto generations, to them that fear him. He hath shewed might in his arm: he hath scattered the proud in the conceit of their heart.   He hath put down the mighty from their seat, and hath exalted the humble.   He hath filled the hungry with good things; and the rich he hath sent empty away.   He hath received Israel his servant, being mindful of his mercy:   As he spoke to our fathers, to Abraham and to his seed for ever.” 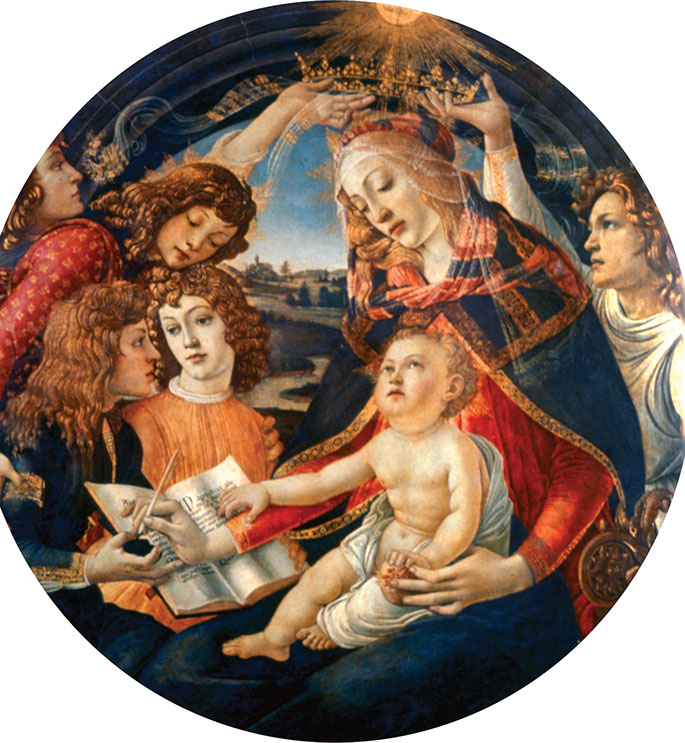 Madonna of the Magnificat

Psalms prefigure Mary as the “house” of the Lord (like the Ark), the “daughter of the King” (to be honored). Don’t be confused by the differences in Catholic and Protestant Psalm numbering.

There are other such examples.

Archetypes and scriptural support for the Immaculate Conception of Mary

The Bible and Apostolic Tradition both teach us that Mary and the Saints are our family:

Do you have pictures of your family?  We do.

Do you worship "graven images" of your mother?  Neither do we.

(Greek doulia; Latin servitus), a theological term signifying the honour paid to the saints, while latria means worship given to God alone, and hyperdulia the veneration offered to the Blessed Virgin Mary. St. Augustine (City of God X.2) distinguishes two kinds of servitus: “one which is due to men . . . which in Greek is called dulia; the other, latria, which is the service pertaining to the worship of God.” St. Thomas (II-II:103:3) bases the distinction on the difference between God’s supreme dominion and that which one man may exercise over another. Catholic theologians insist that the difference is one of kind and not merely of degree; dulia and latria being as far apart as are the creature and the Creator. Leibniz, though a Protestant, recognizes the “discrimen infinitum atque immensum between the honour which is due to God and that which is shown to the saints, the one being called by theologians, after Augustine's example, latria, the other dulia”; and he further declares that this difference should “not only be inculcated in the minds of hearers and learners, but should also be manifested as far as possible by outward signs” (Syst. theol., p. 184). A further distinction is made between dulia in the absolute sense, the honour paid to persons, and dulia in the relative sense, the honour paid to inanimate objects, such as images and relics. With regard to the saints, dulia includes veneration and invocation; the former being the honour paid directly to them, the latter having primarily in view the petitioner's advantage. More detailed explanation of dulia and the reasons for which it is shown to persons or things will be found in the articles IMAGES, RELICS, SAINTS. See also ADORATION and WORSHIP.

from the Catholic Encyclopedia, 1913 edition

The Bible gives an example of the Blessed Virgin Mary’s intercession in John 2:3-5: “...And the wine failing, the mother of Jesus saith to him: They have no wine.  And Jesus saith to her: Woman, what is that to me and to thee? my hour is not yet come.  His mother saith to the waiters: Whatsoever he shall say to you, do ye.” This verse plainly shows that Mary knew of the miracle that he was to perform, and that it was at her request (intercession) He performed the miracle.

The Bible exhorts us to honor Mary, prefigures and compares her to the honored Ark of the Covenant, and gives an example of her intercession:

The Bible esteems asking the angels and saints for their intercession: 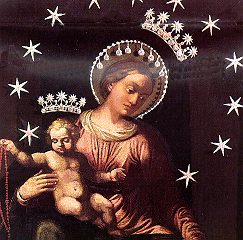 Hail Mary, full of grace, the Lord is with thee. Blessed art thou amongst women and blessed is the fruit of thy womb, Jesus. Holy Mary, Mother of God, pray for us sinners now and at the hour of our death. Amen.

Blessed Virgin of the Rosary of Pompeii, pray for us.