big lies • “land without a people…”

Many Jews insist, “There’s no such thing as Palestine,” but… 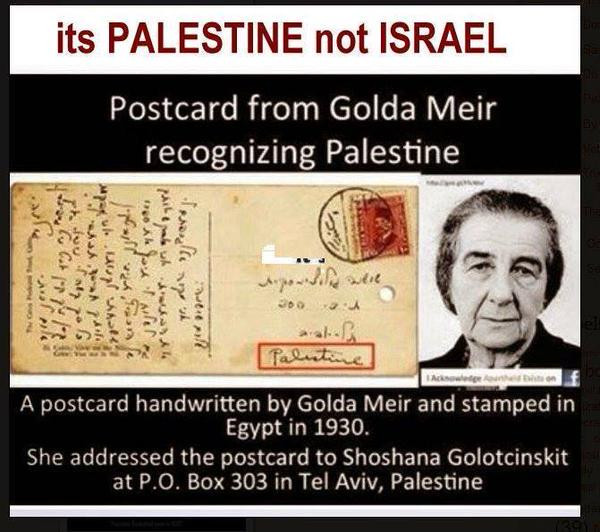 …Golda Meir, a Prime Minister of “Israel” wrote to Palestine from Egypt in 1930. 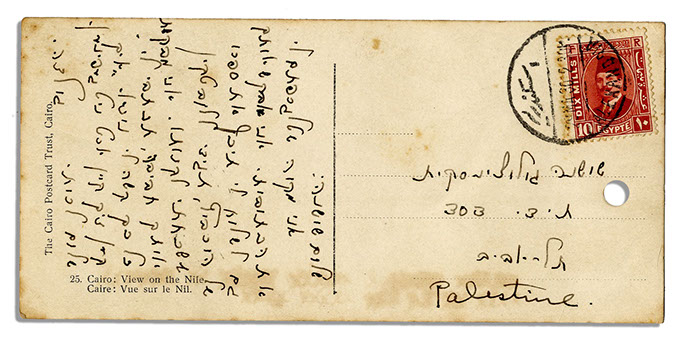 Jews claim there was no nation of Palestine…

…except a protectorate (under Britain and the United Nations) is a nation, admittedly weak militarily, hence “protected,” but a nation nonetheless.

Jews also claim there were no Palestinian leaders before Arafat

Abd al-Qadir al-Husayni, Haj Amin al-Husseini, and Fawzi al-Qawuqji were Palestinian leaders when the Jews invaded in 1948. There have been millennia of leaders of Palestine, including the Abbasids, Hasmoneans, Seleucids, Ottomans, … and, yes, even several Caesars.

Piercing another big Jewish lie,  yet another Jewish fable (Titus 1:14):

Specific references to “Palestine” date back nearly five hundred years before “the time of Jesus.” In the 5th Century BCE, Herodotus, the first historian in Western civilization, referenced “Palestine” numerous times in chronicle of the ancient world, The Histories, including the following passage describing “Syrians of Palestine”:

“...they live in the coastal parts of Syria; and that region of Syria and all that lies between it and Egypt is called Palestine.” (VII.89) The above translation by Harry Carter is featured in the 1958 Heritage Press edition of Herodotus' famous work. Both older and newer versions corroborate the accuracy of the reference. A. D. Godley's 1920 translation of the crucial line states, “This part of Syria as far as Egypt is all called Palestine”, while Robin Waterfield's 1998 updated Oxford translation renders the passage this way: “This part of Syria, all the way to the border with Egypt, is known as Palestine.”

A hundred years later, in the mid-4th Century BCE, Aristotle made reference to the Dead Sea in his Meteorology. “Again if, as is fabled, there is a lake in Palestine, such that if you bind a man or beast and throw it in it floats and does not sink, this would bear out what we have said,” he wrote. “They say that this lake is so bitter and salt that no fish live in it and that if you soak clothes in it and shake them it cleans them.” (II.3)

Two hundred years later, in the mid-2nd Century BCE, ancient geographer Polemon wrote of a place “not far from Arabia in the part of Syria called Palestine,” while Greek travel writer Pausanias wrote in his Description of Greece, “In front of the sanctuary grow palm-trees, the fruit of which, though not wholly edible like the dates of Palestine, yet are riper than those of Ionia.” (9.19.8)

The noted Alexandrian Jewish philosopher Philo, writing around the 1stCentury CE, opined, “Also Syria in Palestine, which is occupied by no small part of the very populous nation of the Jews, is not unproductive of honourable virtue.” (XII.75)

The Jewish historian Josephus (c.37-100 CE) was born and raised in Jerusalem, a military commander in Galilee during the First Jewish Revolt against the occupying Roman authority, acted as negotiator during the Siege of Jerusalem in 70 CE and later penned vital volumes of Levantine Jewish history. His The Jewish War, Antiquities of the Jews, and Against Apion all contain copious references to Palestine and Palestinians. Towards the end of Antiquities, Josephus writes, “I shall now, therefore, make an end here of my Antiquities; after the conclusion of which events, I began to write that account of the war; and these Antiquities contain what hath been delivered down to us from the original creation of man, until the twelfth year of the reign of Nero, as to what hath befallen the Jews, as well in Egypt as in Syria and in Palestine, and what we have suffered from the Assyrians and Babylonians, and what afflictions the Persians and Macedonians, and after them the Romans, have brought upon us; for I think I may say that I have composed this history with sufficient accuracy in all things.” (XX.11.2)

The claim that the Roman emperor Hadrian, eager to punish Jewish inhabitants of Judea after the Bar Kokhba Revolt, officially changed the name of the region to “Syria Palaestina” or simply “Palestine” in 135 CE and forced the Jewish community into exile is dubiousat best, especially when, by then, the terms “Syrian Palestine” and “Palestine” had already been in use for over six hundred years.

Why Are Countless Palestinian Photos and Films Buried in Israeli Archives?

Palestinian photos and films seized by Israeli troops have been gathering dust in the army and Defense Ministry archives until Dr. Rona Sela, a curator and art historian, exposed them. The material presents an alternative to the Zionist history that denied the Palestinians’ existence here, she says 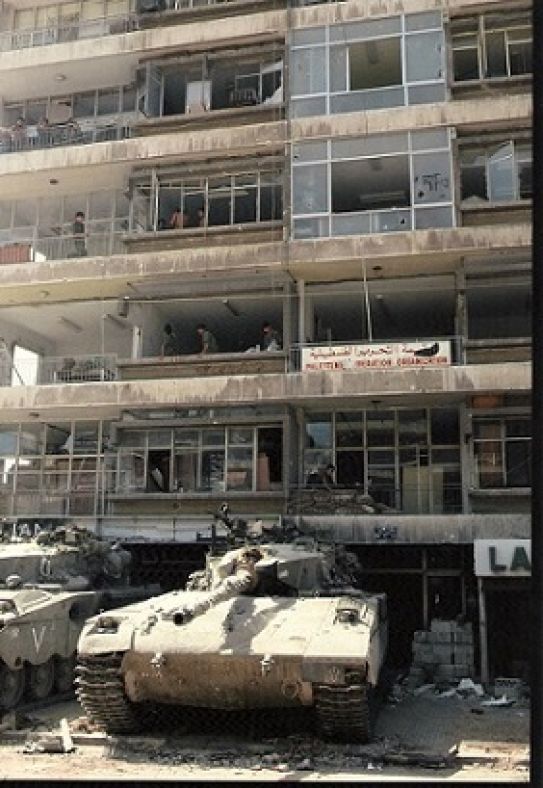 Israeli soldiers loot the archive of the PLO’s Cultural Arts Section as well as material from other PLO offices,
September 1982. Credit: Courtesy of Shlomo Arad

Lawrence of Cyberia: Tell Me Again, Who Made The Desert Bloom?

The Encyclopedia of the Palestine Problem

“… the last official British census in 1931 found Arabs in Jerusalem outnumbered Jews 2:1 with surrounding areas averaging 98% Arab! The Ad Hoc Committee on the Palestinian Question in the United Nations found in 1948 that, except for Haifa, ‘the Arabs have a clear majority over the Jews.’”

So much for the Israeli claim that for centuries Jews in Jerusalem and surrounding areas have outnumbered a tiny Arab population!

“During World War I, Arabs fought with the Allies against the Turks in hope of acquiring national independence. After the Balfour Declaration in 1917, the people of Palestine were considered by the League of Nations a ‘provisionally independent nation” very close to sovereignty. By 1947 Palestinian Arabs played a predominant role in government under the British. ‘The total number of government officials was 44,688 persons, of whom 4,314 were British, 30,178 Arabs, 9,276 Jews, and 920 others.’”

Arabs also vastly outnumbered Jews in municipal councils and leadership in hundreds of primarily Arab towns and cities throughout Palestine.

“The land of Palestine had been a breadbasket of agricultural plenty going back to the original inhabitants, the Canaanites and later Philistines (for whom Palestine is named). Enjoying a climate similar to California’s, the Old Testament description was a “land that flows with milk and honey.” Certainly, much of Palestine in recent centuries had been over-grazed, particularly the mountainous hill country of Judea surrounding Jerusalem. Such barrenness caused visitor Mark Twain to describe it as barren, with hardly an Arab to be seen. Yet, at nearly the same time, “Lawrence Oliphant, who visited Palestine in 1887, wrote that Palestine’s Valley of Esdraelon was ‘a huge green lake of waving wheat, with its village-crowned mounds rising from it like islands; and it presents one of the most striking pictures of luxurious fertility which it is possible to conceive.’”

Numerous pre-20th century accounts, recounted in the Encyclopedia of the Palestine Problem, describe it as a veritable cornucopia of every kind of agricultural produce, with excess exported by the Palestinians even to the nations of Europe.

The Encyclopedia confirms that before 1948

“these Arab towns and villages were not merely place names on a map. They were developed communities containing farms, factories, stores and schools, with an infrastructure of doctors, lawyers, teachers, engineers, merchants, mechanics, industrialists, workers, and farmers which would be the envy of any developing country today…Before 1948 they resided in 12 cities, 8 major towns, and 830 small towns and villages. Arab homes in the cities were either luxurious stone villas with beautiful gardens, or apartments with 2-5 bedrooms. These residences were well-furnished with modern furniture and household goods. No Arab home of the middle and upper classes contained less than eight valuable Persian carpets. All these homes and their furnishings were usurped by Israel.”

“The Encyclopedia extensively documents from British records that, far from Palestinians depending on Jewish prosperity, the Zionists were permeated with Marxist/collectivist values, resulting in eventual failure of the “kibbutz” experiment. Fairly new to Mideast agriculture, they were largely inefficient, dependent upon regular massive infusion of Western Jewish capital. Despite a general Israeli policy of boycott of Palestinian goods and services, the Palestinians, with a rapidly growing population in 1948 of 1,444,274, were both politically, socially, and economically racing toward UN-sponsored nationhood in 1948.

“Such prosperity came to an abrupt, horrific end after the Deir Yassin massacre by Zionist Irgun terrorists on April 9-10, 1948 and many subsequent Jewish outrages and atrocities, panicking 800,000 Palestinians into flight. “In 1948 the Zionists seized 90% of Arab-owned citrus groves, packaging and storage facilities, as well as that year’s crops, looting the prosperous Arab citrus growers, making them destitute refugees.” The same was true of all aspects of Palestinian industry, including olive oil, weaving, textile, tobacco, leather, dairy, wheat, fishing, and construction. In reality, confiscation of Palestinian resources largely constituted the “miracle” of Israel’s sudden abundant agriculture, of which the new state began boasting soon after expulsion of the Palestinians. This delighted evangelicals worldwide who saw it as stunning fulfillment of Biblical prophecy, making the “desert blossom as the rose.” In reality, Israel now possessed thousands of acres of citrus, olives, wheat, etc. seized from the foremost agriculturists of the Middle East, Palestinian orchardists and farmers. The Encyclopedia: “The economic achievements of Israel today are built totally on the capital base of lands, property, and possessions usurped from the Palestinian Arabs.” Ibid., p. 34.

This Land is Mine

Reference and original, including an explanation about each character in this video:

This Land Is Mine from Nina Paley on Vimeo. 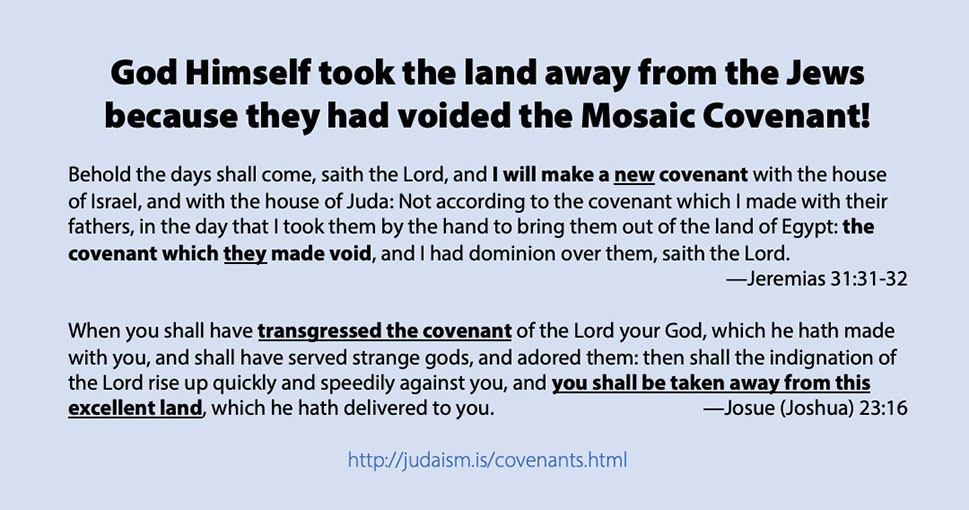