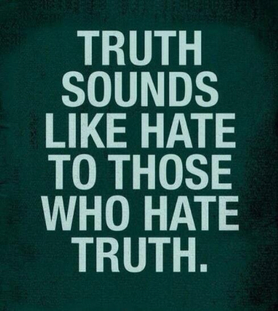 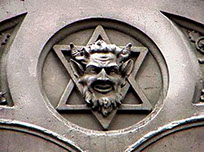 Study the Big Jewish Lie that interests you.

lies, sneaks, and the host-parasite cycle

To facilitate their subversion and control of host societies, the Synagogue of Satan use their every weapon: big lies, media hegemony, economic weapons of mass destruction, and sneaky “dual citizen” infiltrators. These sneaky infiltrators, “sayanim,” are an integral part of the host-parasite cycle.

excerpted from Sayanim & Hasbara and The Art of War

A sayanim (sing. sayan; Hebrew: helpers, assistants) is a Jew living outside Israel who volunteers to provide assistance to Israel and/or the Israeli Mossad utilising the capacity of their own nationality to procure assistance. This assistance includes facilitating medical care, money, logistics, and even overt intelligence gathering. Estimates put the number of sayanim in the hundreds of thousand.

While not official Mossad agents and sometimes acting without explicit knowledge, they may work in the capacity of unregistered representatives of the government of Israel in their respective nations.

Generally-speaking, these non-Israeli Jewish volunteers are asked to engage in legal activities that will not bring them into trouble with the authorities, such as using Wikipedia to spread propaganda. There are exceptions, however, as for example in the case of Jonathan Pollard, the U.S. Naval intelligence employee who engaged in espionage on behalf of Israel’s intelligence agencies and whose exposure by the FBI strained relations between the U.S. and Israel.

Victor Ostrovsky, a former Mossad katsa turned author, wrote extensively about activities of the sayanim, as has Gordon Thomas. According Ostrovsky and Thomas, the sayanim provide assistance of various kinds to Mossad officers operating in foreign countries. This assistance can include facilitating medical care, money, logistics, and even overt intelligence gathering. They can be Judges, Court Clerks, Expert Witnesses, Child Protective Service Workers, Assistant District Attorneys, Police Officers, or anyone with a great degree of power over people’s lives, and will do anything at the behest of Mossad case officers (katsa) for the State of Israel against its enemies or those perceived to be unfavorable politically to Israeli policy. (“By Way of Deception”, Victor Ostrovsky). Sayanim are supposedly not directly involved in intelligence operations, and are only paid for their expenses.

And they receive orders from the Mossad, from a department in the Mossad called the War Department. They work for the Mossad. It means that all these people who work normally. The work in a bank. They work political. They are publishers.

But when the Mossad calls them and tells them, ‘Look, I need information. For instance, I need all the sayanim, all over the world, say that this person — for instance, the Secretary General of the United Nations — has said something antisemitic.’ And you see all over the world — in Europe, in New York — the medias….When I discovered that, I understood.  It’s like when you turn the light on, you know?

Because suddenly you open a newspaper, you listen to the radio, you hear a politician, everybody says, ‘The Secretary of the United Nations said something antisemitic.’ And the poor guy….why? Because the Mossad gave the order to do that.

And I can say for instance Gilad Shallit, you know, the Israeli soldier kidnapped by Hamas. In 24 hours, his name was known all over the world. I mean, even if it was an American general who was kidnapped, his name would never have been mentioned. Gilad Shallit, in 24 hours celebrated in the universe. And this is the work of the sayanim.

Hasbara (Hebrew: הַסְבָּרָה‎ hasbará, “explaining”) refers to pro-Israel propaganda efforts (or similar propaganda efforts promoting Jewish interests more generally).[1][2] The term is used by the Israeli government and its supporters to describe efforts to “explain” government policies, to promote Israel, and to counter what they see as delegitimisation of Israel around the world. Hasbara means “explanation” but is also a Hebrew euphemism for propaganda.

Investigation by The Times of Israel finds that Immigrant Integration Ministry posted stock images of people on Twitter with fabricated quotes.

“If you're going to take people’s guns away, wait until you get elected -- then take the guns away,” she said. “Don’t tell them ahead of time.” 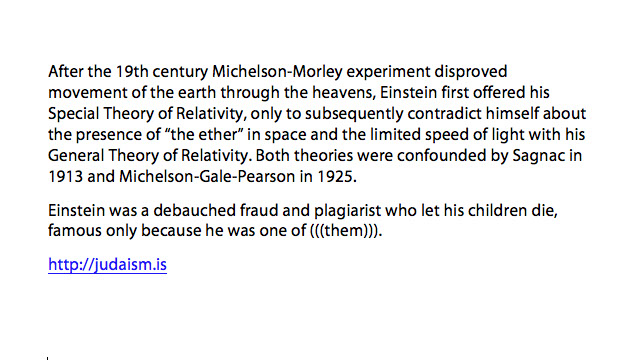 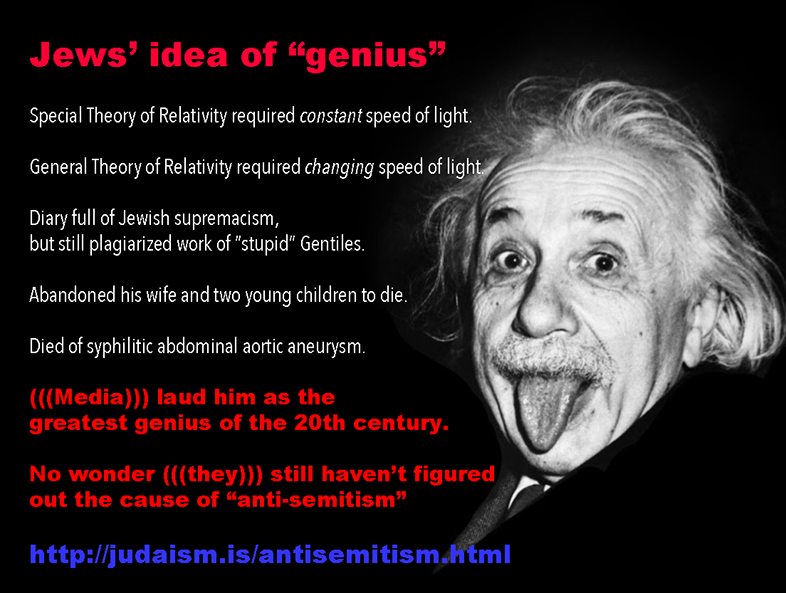 Whenever the rabbis get called out, trapped by the incontrovertible evidence of the genocidal Master Race fundamentals of Judaism, they insist that their “Kill even the best of Gentiles” precept is just a discarded, forgotten vestige from ancient days when the poor downtrodden Jews were just “reacting” to antisemitic persecution “inspired by the Gospels.”

Whenever the rabbis get called out, trapped by the incontrovertible evidence that the genocidal Master Race fundamentals of Judaism are contemporary, neither vestigial, forgotten, nor discarded, they insist that it is only a “small sect” of powerless Jews who innocently believe, but do not practice those fundamental precepts.

Whenever the rabbis get called out, trapped by the incontrovertible evidence that the genocidal Master Race fundamentals of contemporary Judaism are wide-spread, global, disseminated, for example, by Chabad, the largest and best-funded of orthodox Jews, published and practiced daily by financially and militarily powerful Jews and their followers in a nuclear-armed nation, they insist that their ethnic cleansing and kosher thought control are merely “defensive.”

Whenever the rabbis get called out, trapped by the incontrovertible evidence that the genocidal Master Race fundamentals of contemporary Judaism are not defensive, but offensive, committed daily by armed soldiers and “settlers” spewing bullets, biological and chemical weapons (white phosphorus, herbicides, and sewage) against helpless unarmed women and children throwing rocks against tanks, they hysterically insist that their accusers are “blankety-blank haters, Nazis, anti-Semites, and losers envious of the great wisdom, universal humanitarianism, and material wealth of Jews.” 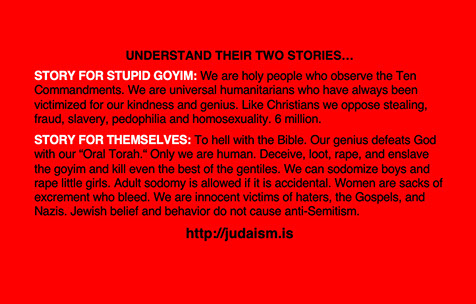 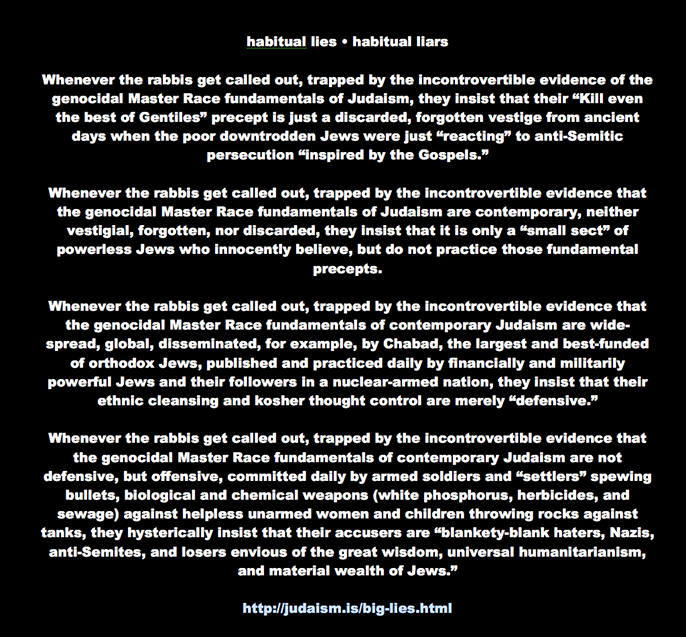 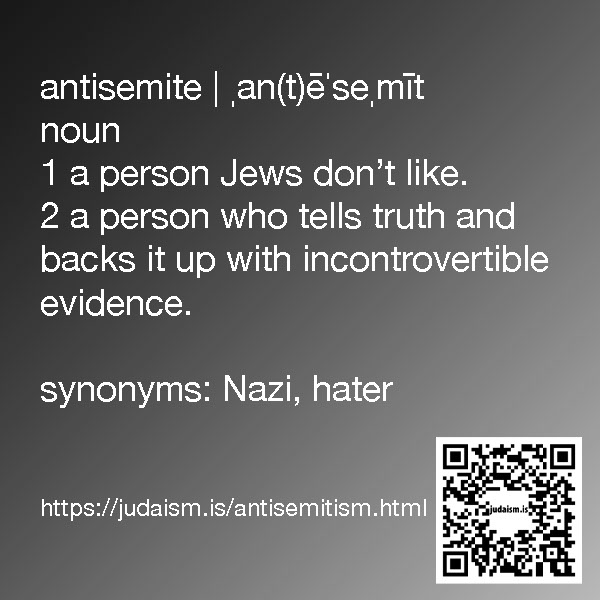 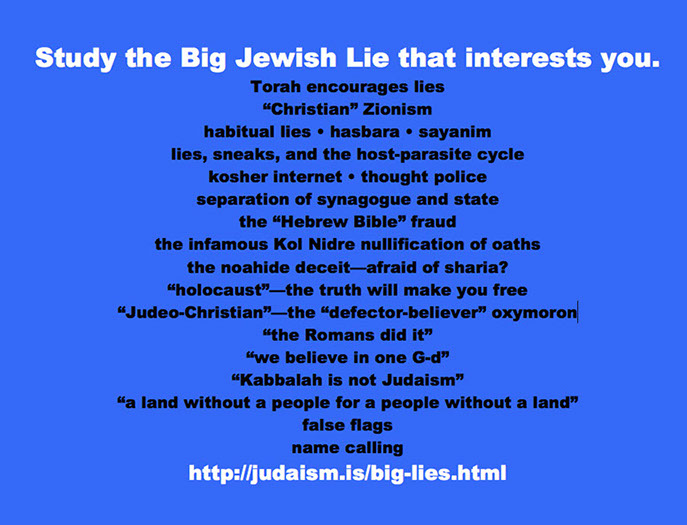 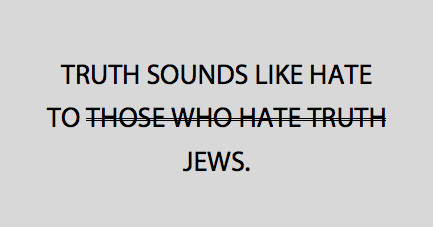 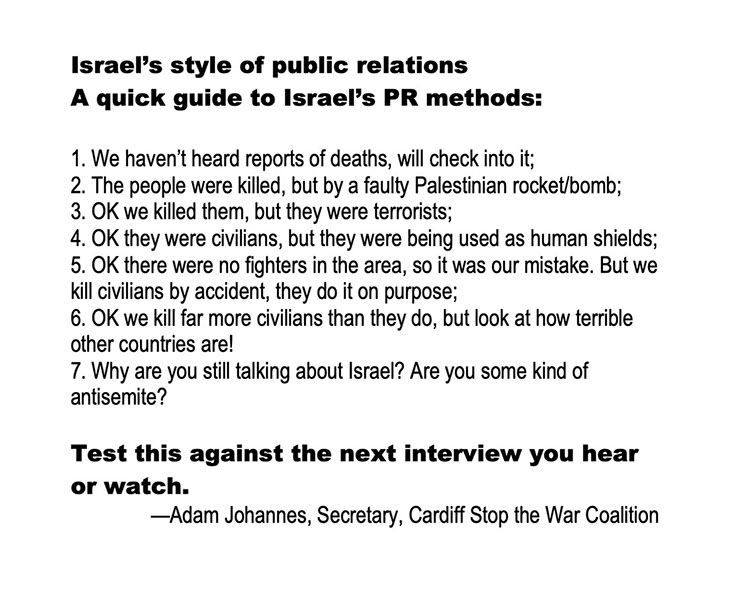 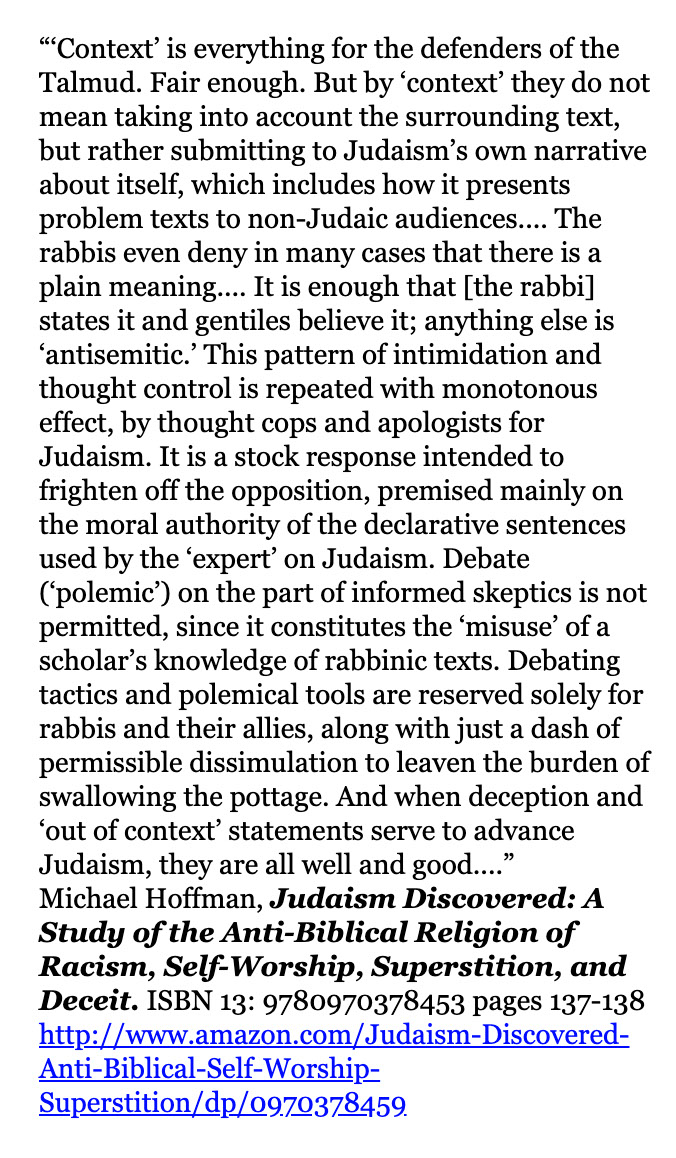 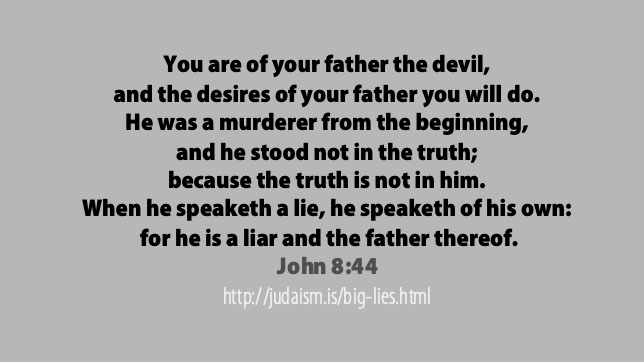 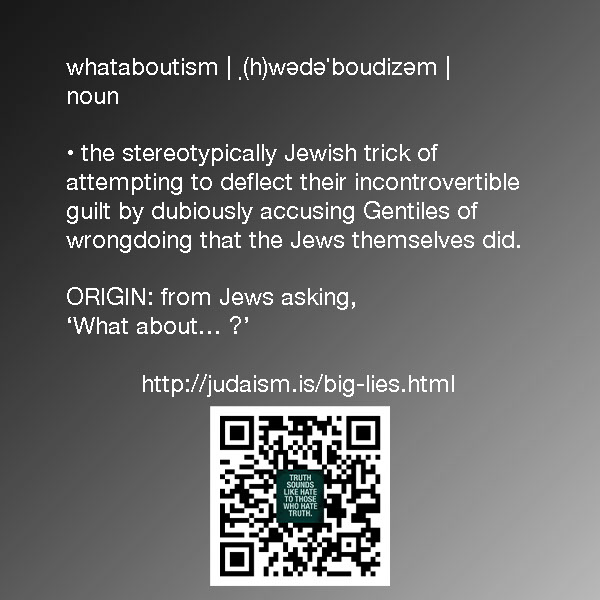 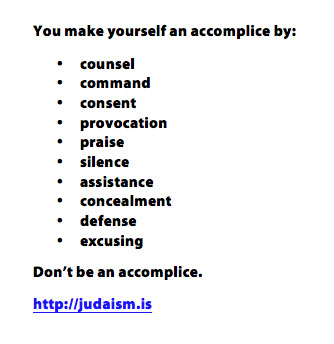