All the false flag disguises of Jews are quintessentially talmudic—derivative of the deceitful exhortation of Moed Kattan 17a that teaches Jews that when they do evil, they should disguise themselves, then do their evil “in a place where they are not known.” Their Torah is full of such instructions to do evil against Gentiles providing there is no blowback on the tribe. 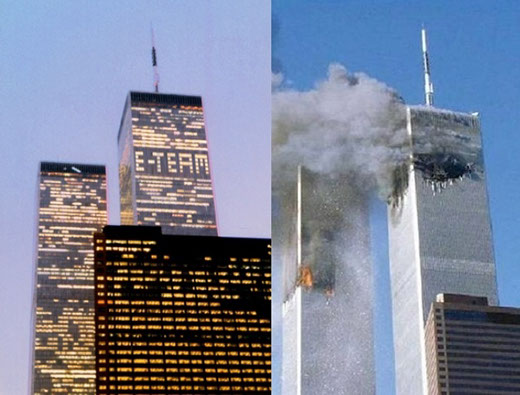 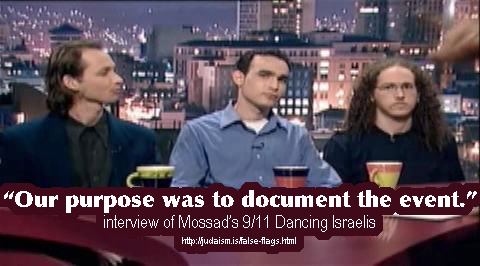 “I want to call your attention to the artist groups (GELATIN & E-TEAM) who were selected to be part of the Lower Manhattan Cultural Council (LMCC) World Views / Studioscape programs that allowed them and other artists to work and live in the WTC in the four years leading up to 9/11 on different floors, including 91 and 92 of the North Tower. Additionally, they were given seven day a week construction access to the WTC that allowed them to freely move all sorts of materials in and out of the complex.”—including boxes of BB18 electrical bombfuse holders. 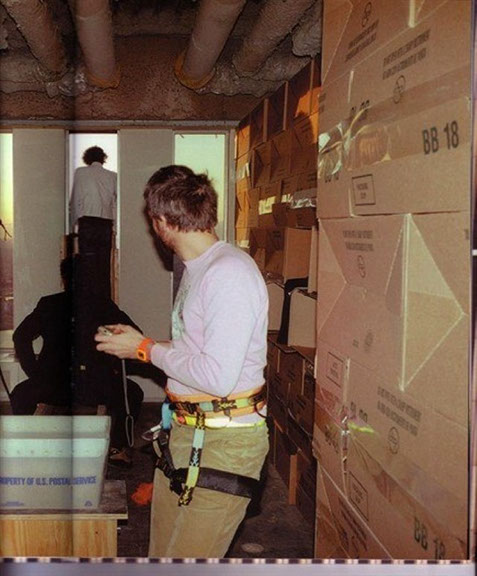 The Israelis have a long history of using false-flag terrorism against the United States:

excerpted from 9/11 and the War on Terror:  Israel's History of False Flag Operations against the U.S.A. by Christopher Bollyn

1954 JUL – The Lavon Affair:  Israeli agents place bombs in U.S. and British libraries and institutions in Egypt in a false-flag operation meant to be blamed on the Muslim Brotherhood.

1967 JUN – Israeli aircraft and ships attack the defenseless USS Liberty, killing 34 and wounding 171, with the intention of sinking the ship – with no survivors – so that the blame could be assigned to Egypt.

In a false flag to blame Egypt, Israel attacked the USS Liberty, even machine-gunning drowning US sailors

1983 OCT – A truck bomb kills 241 Marines in their barracks in Beirut.  Former Mossad agent Victor Ostrovsky says Mossad knew the details of the truck, the time, and location of the bombing, but only gave a general warning to the Americans.  A nebulous “Islamic Jihad” group is blamed; Defense Secretary Caspar Weinberger says U.S. has no knowledge who really did the bombing. This occurred one month after a single Marine stopped an Israeli tank column – some former Marines believe Israel organized the attack.

1986 FEB – Mossad plants a radio relay device in an apartment in Tripoli, Libya, to send fake messages that appear to be from the Libyan government; U.S. intelligence is successfully tricked and President Reagan orders bombing of Libya.

1982 FEB– Israeli Likud strategist Oded Yinon plan calls for the “dissolution of Syria and Iraq” and Balkanization of all Arab states.

1990 – Rejected by Port Authority due to criminal conviction in Israel, Shalom Bendor goes to work for Jules Kroll.

1993 – After first WTC bombing Kroll Associates gets security contract for the Port Authority and the WTC.

1994 – After losing Saudi and Pakistani support, the Israeli-trained “remainder of Hezb-i-Islami merges into al-Qaeda and the Taliban.”

1999 – Hugo Neu creates a global trading division headed by two veteran ferrous metal traders from Marc Rich and Glencore AG in Switzerland. A lot of expense and effort is spent to prepare a network to export scrap iron to Asia while its price is at the lowest level in 50 years. Hugo Neu and the state share the costs of dredging the Claremont channel to allow large ocean-going ships to Asia.

2000 SEP – A Neo-Con group, Project for the New American Century (PNAC) suggests that “a catastrophic and catalyzing event – like a new Pearl Harbor” may be necessary to facilitate “the process of transformation” they call for in U.S. military policy. Ten signers of the PNAC document, including Dick Cheney, were in senior positions of the Bush administration in 2001.

2001 JUL 24 – Larry Silverstein gets lease for World Trade Center. Silverstein obtains lease thru fellow Zionist agent Lew Eisenberg, chairman of the Port Authority. Silverstein and Eisenberg are both members of UJA board, major Zionist fundraising organization.  Since 1996, Silverstein has close contact with Netanyahu; every Sunday afternoon Netanyahu calls Silverstein. Silverstein immediately raises rents by 40% for the few tenants he has.

2001 SEP 11 – Ehud Olmert, Israel’s deputy prime minister, is on an unreported visit in New York City. Why is it secret? While all civilian planes are grounded, at 4:11 p.m. an El Al Boeing 747 takes off from JFK bound for Tel Aviv.  The flight is authorized by the direct intervention of the U.S. Department of Defense.

9/11 – Alex Brown, a firm with ties to Israeli military intelligence and Yair Shamir’s company Scitex has many of the suspicious "put" options.  "Buzzy" Krongard, executive director of the CIA, headed AB until 1998. His wife works for Rothschild Asset Management.

9/11 – Israeli government receives the names of 4,000 Israelis believed to be in the area of the WTC or Pentagon on 9/11. Odigo, an Israeli messaging company, is used to send warning several hours before attacks.  Four Israelis die at WTC.

9/11 – Five Israelis working for Urban Moving Systems are arrested on 9/11 after being seen photographing and celebrating the attack on the WTC. The fake moving company is later found to be a front for the Mossad. Two of the Israelis are known Mossad.

9/11 – Netanyahu praises 9/11 atrocity to NYT:  “It's very good… it will generate immediate sympathy.” In 2008, he says in Israel: “We are benefiting from one thing, and that is the attack on the Twin Towers and Pentagon, and the American struggle in Iraq.”

9/11 – Two Zionist-owned junkyards manage hasty destruction and exportation of evidence using large ships bound for Asia able to load at Hugo Neu because the Claremont Channel has been dredged since 1999.

Post 9/11 – Zionist with conflict of interest presides over 9/11 lawsuit:  Judge Alvin Hellerstein manages 9-11 tort litigation, while his son is lawyer in Israel with firm that represents ICTS, key defendant in 9/11 litigation. Hellerstein dismisses ICTS and every 9/11 case is settled out of court.

2003 MAR – Zionists control 9/11 myth:  Appointed director of 9/11 Commission, Philip Zelikow frames the agenda and decides what evidence the commission sees. A specialist in “public myths,” Zelikow comes to commission with complete outline of report – before staff even begins working.

Until today – Controlled media ignores crucial 9/11 questions and evidence. Media pushes false narrative about 9/11 and the War on Terror while ignoring evidence that disproves the official myth.

Fox News reported heavy Israeli spying against USA during the 9/11 attacks, but the reporting was quickly disappeared.

Israel Spies on the USA part 1

Israel Spies on the USA part 2

Israel Spies on the USA part 3

Israel Spies on the USA part 4 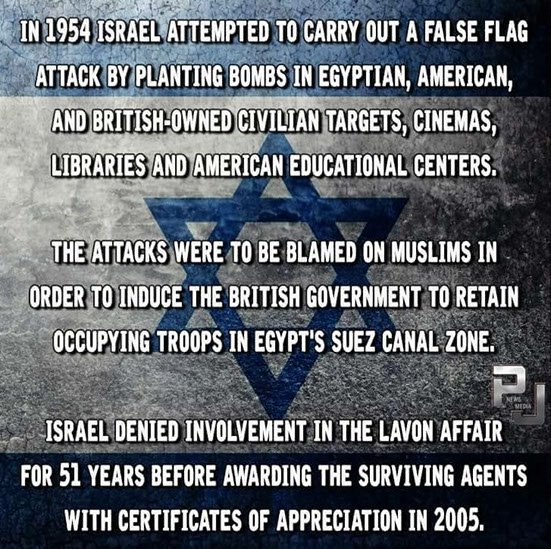 The Loss of Liberty (2002 Documentary)

“The War on Terror among Truth Seekers”

Christopher Bollyn: The Man Who Solved 9/11

The Zionist War OF Terror with Christopher Bollyn 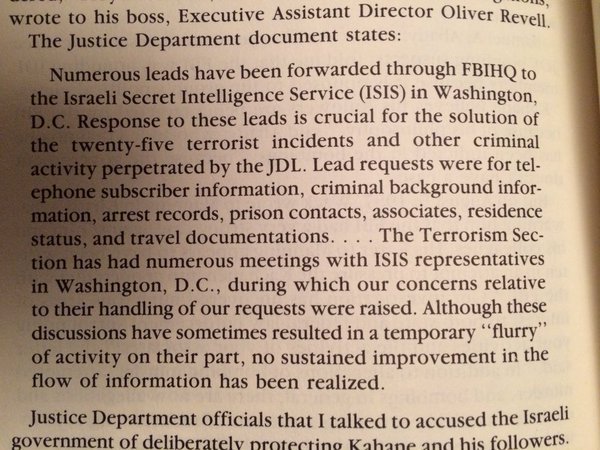 “Islamic terrorist” with Star of Rempham

Numerous “antisemitic” attacks have been perpetrated by Jews to gain sympathy. Many are documented here. 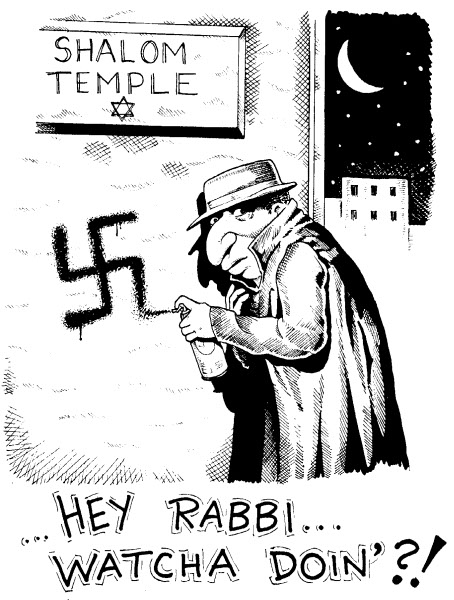 9/11 mastermind of the missing trillions