altering the holy word of God—a crime of biblical proportion

The deceivers so hate Jesus that they have re-written the Bible and, because their tampered forgery is in Hebrew, they have gulled many. Masorete Jews altered the Old Testament for a millennium after the Crucifixion in order to dethrone Jesus Christ in their tampered Hebrew fraud.

At the time of Jesus Christ’s Incarnation, there was no complete Hebrew Bible. Ironically the only complete Bible (Old Testament) for the Israelites at the time of Jesus was the Greek Septuagint, a Greek translation authorized and compiled in about 250 B.C. by the 72 rabbis of the Sanhedrin, the official Jewish court.

After Christ and the destruction of Jerusalem, a “Hebrew Bible” was compiled to de-throne Jesus Christ.

“The compiler Akiba ben Yosef (aka Rabbi Akiva) drew up the canon which would became the Tanakh in A.D. 95.  He believed that the messiah wasn’t Jesus the Christ but a man named Bar Kochba.  In his Torah he included the rabbi-created Halakahic laws and set out to destroy the credibility of the Gospels.  This text ultimately became the Hebrew Bible or Masoretic Text when it was codified by Aaron Ben Asher in the A.D. 10th century and was latter given the stamp of sacred authorization by none other than the anti-Catholic, Maimonides!”

As late as 1000 A.D., the Masoretes, Jewish enemies of Jesus, altered their phony “Hebrew Bible” to reflect Judaism’s hatred of Jesus Christ. Need proof? The Dead Sea Scrolls agree with the Septuagint confirming that the “Hebrew Bible” was changed by the rabbis to reflect their hatred of Jesus Christ, His Church, and the New Israel, Christians. The rabbis altered the Word of God to dethrone Jesus, dispute His Virgin Birth, etc.  Ironic isn’t it that the Greek is authentic while the Hebrew is not? It is a clever and diabolical trick of the rabbis to pretend otherwise. For the Old Testament, rely on the Septuagint. For an English version, rely on the Douay Rheims, as we do here.

Four lines of evidence confirm that the Septuagint is authentic and the Masoretic “Hebrew Bible” is a post-Christian fraud:

The New Testament quotes the Septuagint, not the Masoretic “Hebrew Bible.” The early Church accepted the Septuagint texts as authentic. The Guns, Lies, and Forgeries article below is compiled by a non-Catholic (Greek Orthodox), but it is a well-written and succinct summary of the problems with the Masoretic texts and the extreme measures that the Israelis have taken to prevent access to the Dead Sea Scrolls because the Dead Sea Scrolls contradict the Masoretic texts in hundreds of verses:

Fresh off the ‘drukn’ — The Bible of Friendship

As we teach our children, when he attacks you, the devil will not be wearing a red suit and carrying a pitchfork. He will pose as your friend. As the saw goes, “With friends like these…,” the rabbis are coming at Catholics in “friendship,” amicizia, to teach us what we should believe.  Expectedly the talmudic anti-Pope is backing the rabbis’ play, not Jesus. The details will enrage you.

Not content to pervert only the Old Testament, Satan’s team is perverting the New Testament

—and the talmudic anti-Pope is ecstatic 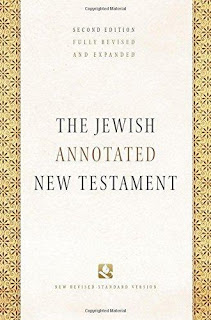 Francis receives a copy of ‘The Jewish Annotated New Testament’

The Jewish Annotated New Testament was written by eighty Talmudic Jews (anti-Christians such as Susannah Heschel, Jacob Neusner, Geza Vermes). In it they cite the Talmud, the Kabbalah, the Mishnah, the Zohar, the Pirkei Avot, the Dead Sea Scrolls, and an assortment of other Judaic literature to explain that Jesus was nothing more than a simple Jew and that the anti-semitism of Christianity comes from the non-Jewish followers of Jesus because they twisted his words. It’s enough to make one want to barf.  As an example of the ‘scholarship’ in the book we quote from the preface (pp. xiii-xiv) of the book written by its editors, Amy-Jill Levine and Marc Zvi Brettler,

See there it is and not very subtly. Christians are too dumb to understand the New Testament and need the Talmudic Jews to explain it to them.  The “good news” of the gospels isn’t “good news” if it says something against the Jews!  Could you ever imagine the shoe being on the other foot and the ‘holy’ texts of Talmudic Judaism such as the Talmud and the Zohar being annotated by the Christians so it is pointed out that Talmudic Judaism is not only anti-Christian but also anti-goyim?  Don’t hold your breathe because it’ll never happen.  That being said, this book is right up Francis’ hasidic alley.  In two 2018 speeches to the Participants in the International Conference on the Responsibility of States, Institutions and Individuals in the fight against anti-Semitism and anti-Semitic hate crimes, to the European Jewish Congress’ conference “An End to Antisemitism!” , and in his preface to An End to Antisemitism! A Catalogue of Policies to Combat Antisemitism, Francis said as much, “Translations of the New Testament... need marginal glosses, and introductions that emphasize continuity with Jewish heritage of... Christianity... and warn readers about antisemitic passages.”  He doesn’t end there however, “As I have often repeated, a Christian cannot be an anti-Semite; we share the same roots. It would be a contradiction of faith and life. Rather, we are called to commit ourselves to ensure anti-Semitism is banned from the human community.”

Francis’ Novus Ordo religion doesn’t begin with the Gospel of John, “In the beginning was the Word, and the Word was with God, and the Word was God,” but begins with the Go-spiel of Elie, “In the beginning was the Holocaust...” Since the holocaust is his standard reference, he must combat anti-semitism (it matter not if it be imagined or real) at all times.   The motto of his noahide Holocaustianity is an inversion of the Jesus’ teachings and His Church’s.  It can be summed up as, ‘forgiveness is never attainable, reparations are never ending, and salvation is only for the chosen ones’.

The Kabbalistic “Bible” • the Alba “Bible”

“Rabbi Arragel took pains to make the Alba Bible a legacy of the Golden era of Sephardic scholarship, boldly avoiding concessions to Christian thinking. He included in his commentary extracts from rabbinical writings and the Quabbalic Zohar, and illustrations specifically depicting Jewish scriptural interpretations and religious objects.”

“The Alba Bible, with its 513 folios and 334 miniatures, is a powerful work of visual art. But still more significant is the vast commentary it contains. Rabbi Moses showed great independence and courage, and his translation and commentary make few concessions to Christian thinking, although he must have been aware of the dangers awaiting both him and the Jewish community. It is rich in extracts not only from rabbinical writings such as the Targumim, Midrashim and Talmud, but also from later works such as the Zohar - the source book of Jewish mysticism. Rabbi Moses may well have given the artists detailed instructions on the illustrations, furnishing them with specifically Jewish interpretations of biblical scenes. The resulting images are also very important as cultural records, since contemporary weapons, musical instruments, furniture and costumes are all depicted...no other extant manuscript contains so many rabbinically inspired miniatures. For instance, Cain kills Abel by biting his neck like a serpent, exactly as is described in the Zohar. Similarly, religious objects from the Temple are depicted just as in Hebrew Bibles of the same period.”

“The Alba Bible contains a series of comments on the writing of both Jewish and Christian theologians, including Abraham ibn Ezra, Maimonides, Nahmanides, R. Joseph Kimhi, R. Asher ben Jehiel, Shlomo ben Aderet, R. Ya'acob and Nissim of Gerona. There is also commentary taken from rabbinic literary sources such as the Talmud and the Midrash.”

Not to be outdone by the Jews, Protestants continued the Masoretic fraud with their King James Version “Bible”

Anxious to vet Protestant heresies, the homosexual King James assembled a team friendly to Protestant innovations and built upon the fraudulent Masoretic texts, made about 30,000 significant alterations in the Word of God, and dumped more than 7 inconvenient books from the long-accepted Bible.

See also how the Jews “reformed” Protestants out of the Church: 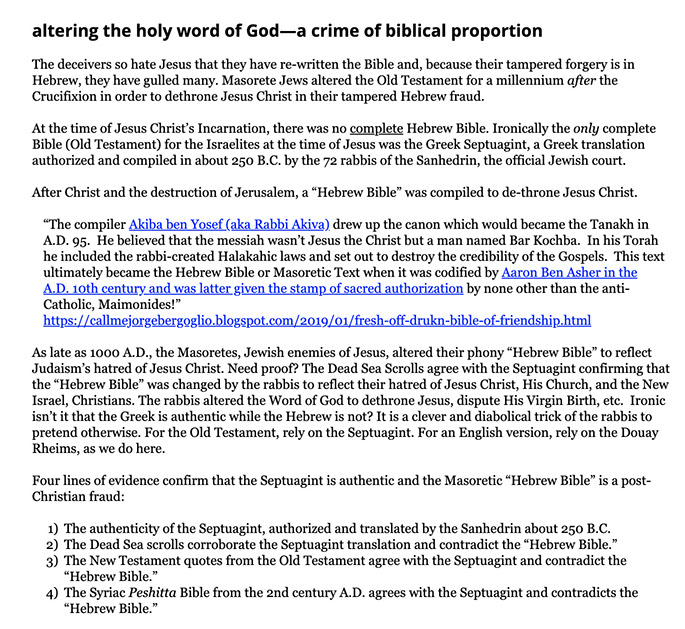