news • Hungary • “The Jew shrieks in pain as he strikes you!”

torture and murder of Hungarian Catholics by Jews • suppressed history

by Karl Radl, Semitic Controversies A Daily Blog about Jews and Judaism, December 11, 2016 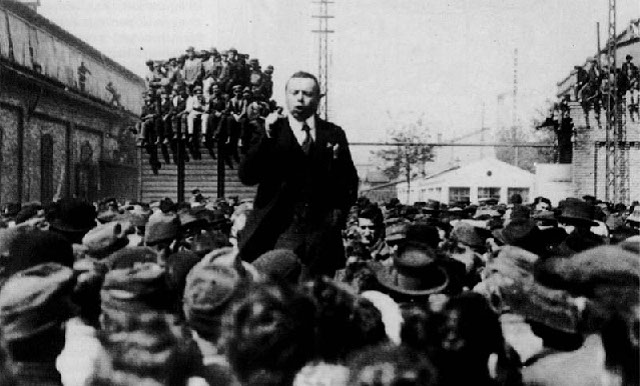 just one of  thousands of Jewish mass murderers

‘This was a huge victory. They can see it from the moon, but certainly from Brussels as well,’ says Hungarian leader

Will Viktor Orban Bring Down the House That Davos Built?

One of innumerable available examples:

New steering committee for ‘House of Fates’ museum in Budapest headed by Yad Vashem museum's former director has developed a new concept for the permanent exhibition.

“Hungarian Prime Minister Viktor Orban used language that some critics have said has anti-Semitic undertones at a rally three weeks before he seeks re-election for a third term. Speaking Thursday in Budapest, Orban harshly criticized proponents of immigration. He also called out George Soros, the Hungary-born Jewish financier and philanthropist, and those who support his ‘open society’ ideals. ‘We are fighting an enemy that is different from us. Not open, but hiding; not straightforward but crafty; not honest but base; not national but international; does not believe in working but speculates with money; does not have its own homeland but feels it owns the whole world,’ Orban said, according to the Guardian’s Shaun Walker. …Orban and far-right activists have attacked Soros for well over a year, waging a campaign that has involved billboards and other advertisements. Some Hungarian Jews, in addition to Soros himself, find the campaign anti-Semitic.”

Hungary: Migration must be stopped, not managed

“International efforts should focus on helping people living peacefully in their homelands rather than trying to legalise illegal migration, Foreign Minister Peter Szijjarto told a United Nations intergovernmental meeting in New York on Monday. ‘Migration should not be managed, it must be stopped,’ Szijjarto told the meeting dedicated to the UN’s global migration package. Hungary rejects the position that migration is good, because ‘it is bad for those that are forced to leave their homes, it is bad for transit countries and it poses a challenge for destination countries, too,’ he insisted. ‘Migration is not a fundamental human right; living peacefully and in good conditions in one’s homeland is,’ Szijjarto said. He added that protecting borders is ‘not an option but a responsibility’ for countries. He added that when people are forced to leave their homeland, they should be helped to ‘stay as close as possible and once the conflict is over, return home.’”

Hungary: It’s Now a Criminal Offence to Aid Invaders in Any Way

“The Hungarian Parliament has passed the set of laws known as the ‘Stop Soros’ package which criminalizes any activities which support illegal immigration—including legal and physical aid of any sort.

According to a report in the Magyar Hirlap newspaper in Budapest, the law—in form of a constitutional amendment which says it is designed to ‘preserve Hungary’s Christian culture,’ the legislation was supported by the ruling Fidesz-KDNP alliance and the strongest opposition party Jobbik, easily giving it a 72 percent majority in the parliament.

“According to the Prime Minister’s Cabinet Office, the ‘Stop Soros legislative package and the amendment to the Fundamental Law assert the will of the Hungarian people, providing the country with additional powerful protection against illegal migration.’ In terms of the amendment, the law on the police, the Penal Code, the law on asylum, the law on the state borders and the law on offences have been amended to state that the organization of illegal immigration is an illegal act, and a relevant criminal scenario will be accordingly incorporated into the Penal Code. The law makes it illegal to help invaders in Hungary with legal advice, or to provide them with financial assistance. Offences will be punishable with a 12-month jail term. The amendment also changed the Constitution to make it illegal to “settle foreign populations” in Hungary. This is designed to set the legal parameters for the country’s refusal to take in the invaders invited into Europe by Germany and other leftist states in terms of the European Union’s “redistribution” arrangement.

“‘Hungary must be protected from illegal migration; this is why we need the amendment of the Constitution and the ‘Stop Soros’ legislative package,’ Gergely Gulyás, the Minister heading the Prime Minister’s Office, was quoted as saying. ‘The legislation has been named the ‘Stop Soros’ bill, after the Hungarian-born Jew George Soros who finances anti-white organizations in Europe and America.””

“The Hungarian parliament passed the ‘Stop Soros’ package of laws that penalise activities in support of illegal migration and also the constitutional amendment on “the preservation of Hungary’s Christian culture”, MTI reports. Both the legislative package and the amendment was supported by the ruling Fidesz-KDNP alliance and the strongest opposition party Jobbik. According to the Prime Minister's Cabinet Office, the ‘Stop Soros legislative package and the amendment to the Fundamental Law assert the will of the Hungarian people, providing the country with further powerful protection against illegal migration.’”