Jesus was not a Pharisee or Talmudic Jew; He damned them… repeatedly!

shall be ground into powder  Matthew 21:44

the kingdom of God shall be taken from them Matthew 21:43

their house shall be left desolate Matthew 23:38

they do not enter the kingdom of Heaven Matthew 23:13

adversaries to all men I Thessalonians 2:14

children of the devil John 8:44

enemies of the Gospel Romans 11:28

transgress the commandment of God for their own tradition Matthew 15:3

“The Jewish religion as it is today traces its descent, without a break, through all the centuries, from the Pharisees.”  Universal Jewish Encyclopedia, Vol. 3 pg. 474

Rabbi Dr. Finkelstein, The Pharisees: The Sociological Background of Their Faith, The Jewish Publication Society of America (1946) p. xxi

“The Talmud is the written form of that which in the time of Jesus, was called the ‘Tradition of the Elders,’ and to which He makes frequent allusions.” *

Woe to you scribes and Pharisees, hypocrites; because you go round about the sea and the land to make one proselyte; and when he is made, you make him the child of hell twofold more than yourselves.

The word “Jew” is a modern word with many ambiguous meanings, but neither by race, residence, nor religion was Jesus Christ a “Jew”

and He certainly isn’t a bastard of a whore boiling in shit as Jews insist.

In his book The Controversy of Zion, Douglas Reed drills that point home most eloquently;

What manner of man was this? Another paradox in the story of Zion is that in our generation Christian divines and theologians often insist that “Jesus was a Jew”, whereas the Judaist elders refuse to allow this (those Zionist rabbis who occasionally tell political or “interfaith'” audiences that Jesus was a Jew are not true exceptions to this rule; they would not make the statement among Jews and seek to produce an effect among their non-Jewish listeners, for political reasons). *

This public assertion, “Jesus was a Jew”, is always used in our century for political purposes. It is often employed to quell objections to the Zionist influence in international politics or to the Zionist invasion of Palestine, the suggestion being that, as Jesus was a Jew, none ought to object to anything purporting to be done in the name of Jews. The irrelevance is obvious, but mobs are moved by such phrases, and the paradoxical result, once again, is that a statement, most offensive to literal Jews, is most frequently made by non-Jewish politicians and ecclesiastics who seek Jewish favour.

The English abbreviation, “Jew” is recent and does not correspond to anything denoted by the Aramaic, Greek or Roman terms for “Judahite” or “Judean”, which were in use during the lifetime of Jesus. In fact, the English noun “Jew” cannot be defined (so that dictionaries, which are scrupulously careful about all other words, are reduced to such obvious absurdities as “A person of Hebrew race”); and the Zionist state has no legal definition of the term (which is natural, because the Torah, which is the Law, exacts pure Judahite descent, and a person of this lineage is hardly to be found in the entire world).

If the statement, “Jesus was a Jew”, has meaning therefore, it must apply to the conditions prevailing in his time. In that case it would mean one of three things, or all of them: that Jesus was of the tribe of Judah (therefore Judahite); that he was of Judean domicile (and therefore Judean); that he was religiously “a Jew” if any religion denoted by that term existed in his time.

This book is not the place to argue the question of Jesus's racial descent, and the surprising thing is that Christian divines allow themselves some of the statements which they make. The reader should form his own opinion, if he desires to have one in this question.

The genealogy of Mary is not given in the New Testament, but three passages might imply that she was of Davidic descent; St. Matthew and St. Luke trace the descent of Joseph from David and Judah, but Joseph was not the blood father of Jesus. The Judaist authorities discredit all these references to descent, holding that they were inserted to bring the narrative into line with prophecy.

As to residence, St. John states that Jesus was born at Bethlehem in Judea through the chance that his mother had to go there from Galilee to register; the Judaist authorities, again, hold that this was inserted to make the account agree with Micah's prophecy that “a ruler” would come out of Bethlehem”.

The Jewish Encylopaedia insists that Nazareth as Jesus's native town, and indeed, general agreement exists that he was a Galilean, whatever the chance of his actual birthplace. Galilee, where nearly all his life was spent, was politically entirely separate from Judea, under its own Roman tetrarch, and stood to Judea in the relationship of “a foreign country” (Graetz). Marriage between a Judean and a Galilean was forbidden and even before Jesus’s birth all Judeans living in Galilee had been forced by Simon Tharsi, one of the Maccabean princes, to migrate to Judah.

Thus, the Galileans were racially and politically distinct from the Judeans.

Was this Galilean, religiously, what might today be called “a Jew”? The Judaist authorities, of course, deny that most strenuously of all; the statement, often heard from the platform and pulpit, might cause a riot in the synagogue.

It is difficult to see what responsible public men can mean when they use the phrase. There was in the time of Jesus no “Jewish” (or even Judahite or Judaist or Judean) religion. There was Jehovahism, and there were the various sects, Pharisees, Sadducees and Essenes, which disputed violently between themselves and contended, around the temple, for power over the people. They were not only sects, but also political parties, and the most powerful of them were the Pharisees with their “oral traditions” of what God had said to Moses.

If today the Zionists are “the Jews” (and this is the claim accepted by all great Western nations), then the party which in Judea in the time of Jesus corresponded to the Zionists was that of the Pharisees. Jesus brought the whole weight of his attack to bear on these Pharisees. He also rebuked the Sadducees and the scribes. but the Gospels show that he held the Pharisees to be the foes of God and man and that he used an especial, scarifying scorn towards them. The things which he singled out for attack, in them and in their creed, are the very things which today's Zionists claim to be the identifying features of Jews, Jewishness and Judaism.

Religiously, Jesus seems beyond doubt to have been the opposite and adversary of all that which would make a literal Jew today or would have made a literal Pharisee then.

None can say with certainty who or what he was, and these suggestive statements by non-Jewish politicians ring as false as the derisive and mocking lampoons about “the bastard” which circulated in the Jewish ghettoes.

*Rabbi Stephen Wise, the leading Zionist organizer in the United States during the 1910-1950 period, used this phrase for the obvious political motive, of confusing non-Jewish hearers. Speaking to such an “inter-faith” meeting at the Carnegie Hall at Christmastide 1925, he stated “Jesus was a Jew, not a Christian” (Christianity was born with the death of Jesus).

For this he was excommunicated by the Orthodox Rabbis Society of the United States, but a Christian Ministers Association “hailed me as a brother”. Rabbi Wise adds the characteristic comment: “I know not which was more hurtful, the acceptance of me as a brother and welcoming me into the Christian fold, or the violent diatribe of the rabbis”.

The Controversy of Zion

Even through the Gospel of St. John you can appreciate how the meaning of “the Jews” changed from meaning the whole of the people to meaning those who conspired against Jesus, murdered Him, and now defame Him and persecute His Church and His new Chosen people, His Believers.

Geographically, Jesus of Nazareth was a Galilean, not a Judean.

Liturgically, some claim Jesus celebrated a “seder.” Can you really see Jesus Christ of the Beatitudes calling down the talmudic hate feast’s liturgical “Passover” curse on Gentiles—“Pour Out Thy Wrath…” (Shefokh hamatkha)?

Jesus emphatically repudiated Pharisaical/Talmudic Judaism. Jesus did not turn His back on His people, but many of them turned their backs on Him!

If anyone insists that “Jesus was a Jew,” it is likely they are either (1) ignorant or (2) trying to elevate a lying, murderous Master Race creed that Jesus Christ Himself damned.

Definitely not one of them!

It is diabolical indeed that the synagogue of Satan pretends that Jesus was one of them. Now, to give themselves cover, they now use the Holy Name of Jesus, the One they hate most, the One whose blood they called down on themselves and all their generations, the One they say was an idolater [Sanhedrin 43a, 107b], the One they say was a mamzer (bastard) conceived adulterously in niddah (menstrual filth) by a Roman soldier named Pandera [Kallah 51a] of a whore [Sanhedrin 106a] and that He is now in Hell boiling in feces and, in some editions because Jesus is accused of sexual perversion, semen [Gittin 57a].

Do not be suckered by those that God warned are “the synagogue of Satan, those who say they are Jews, and are not, but do lie.” Apocalypse 3:9

Jesus and the Holy Family were most emphatically not one of them.

As for the foolish Essene claim:

Essenes were forbidden to make animal sacrifice. Not only did Jesus’ Holy Family offer the sacrifice of turtledoves (Luke 2:24), but Jesus Himself commanded the healed leper to make the animal sacrifice (Mark 1:44) required by Mosaic Law (Leviticus 14:30).

Update on the White Crucifixion

The talmudic ghettofication of St. Joseph and Child Jesus 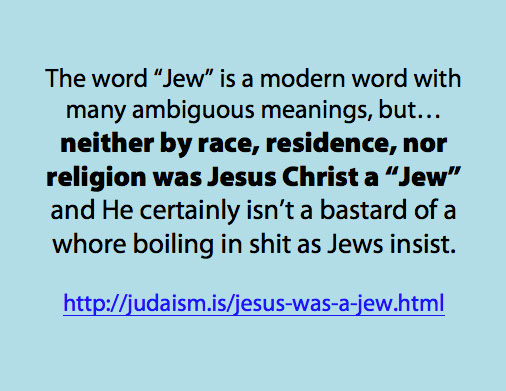