Talmud in the Tabernacle

“A cross without a corpus, a fabulously wealthy charity that apparently donates not one thin dime to anyone, shattered adherents tossed into the street, and Our Father doesn’t mean the first person of the Blessed Trinity. Welcome to the wacky and corrupt bizarro Catholicism of the Prelature of the Holy Cross and Opus Dei.…

“Opus Dei subtly betrays the silhouette of a secret society. Governing by-laws, constitutions, publications, even the details of the Founder’s canonization are kept secret from both the public and the sect’s members. Similar to the cult tactics mentioned above, members are often encouraged to divulge their inmost thoughts to ‘spiritual directors’ which is then leveraged as a means to psychologically control behavior.  As Randy Engel related earlier this year, the secretive personal prelature seems to operate at the elite levels of society, controlling vast amounts of wealth, the details of which remain undisclosed due to the organizational structure’s private holding companies.… Reading up on the Opus Dei Awareness Network you’ll discover refugees from the Opus Dei Octagon who talk about a founding Saint who cussed a blue streak, called his assistant a sow and publicly demanded that a female cult member drop her drawers for a bare-nekked spanking. -There goes that posterior orientation again. Can we get detailed insight from James Martin, SJ on this topic? But Josemaria Escriva de Balaguer is definitely a saint, because he had an apparition of the Blessed Virgin that was never authenticated by the Church, occurred in front of exactly zero witnesses, and for which there is the same amount of evidence, none. Forgive the flippant tone so far, as the victims of Opus Dei are kept in my prayers, but the conciliar religion is such a joke.  Check out Opus Dei awareness network for further description of the suffering that these evil people create. Now let’s look deeper.…

The following explanation is sent by a collaborator of Hebrew origin and Kabbalistic practice who for years was shown as Catholic, but who finally decided to make use of her secret identity to particularize and clarify some of the practices of kabbalists who infiltrated in the Catholic Church for centuries, and now in the Neo Conciliar Church.

On this occasion he reveals to us something of what had spread about the Marrano José María Escriv(b)a [note: parenthetical spelling might refer to Escriva’s name change from the judaic Escriba] to Balaguer y Albás, founder of Opus Dei, and he does it from the Hebrew point of view:

When you talk about the Opus Dei as Kabbalists, you have to specify something. They are not just a group of people who practice the Hebrew kabbalah disguised as devout Catholics, but something else.…

From the history of Opus Dei there is much to explain, and much that is hidden. José María was a man very aware of his origin and blood. And he wanted to do something for the Spanish crypto-jews, scattered and unrelated to each other. He wanted them to be together and united. It was not difficult to know who they were, you just had to look into the families of political and economic power in Spain. That is why opus are not, as it is erroneously called, a “Catholic movement for the rich”. It is a movement to unite crypto-Hebrew families and prevent them from assimilating by mixing with rich non-Hebrew families. Initially for Spain, but in a short time, Escrivá made an international expansion.

“There is so much here that a summary is in good order. Centuries-old Christian-kabbalism (a very real condition!) should have our attention, as it predates the Enlightenment by centuries and causally explains much more about our present catastrophe. The writer then gives an important reminder of the crypto-judaic agenda, which we saw in previous posts with the life of the heretic Arius, the overthrow of the Visigoths, and anti-Pope Anacletus II. Crypto-judaism moves by stealth and strategically acquires positions of power and influence within its targeted host. Principles of concealment and misdirection are used to both hide the real agenda and mislead those non-judaics who become suspicious. Judaic supremacists rigorously pursue the retention of their pure Talmudic identity, even in spite of intermarriages. Secrecy supports this agenda. Finally; dichotomies such as left/right, liberal/conservative, traditional/novus ordo mean absolutely nothing to the crypto-judaic, other than a means to confuse the targeted population or actively employ the divide-and-conquer strategem. There is one loyalty alone, whether it be to the Talmud, the race, or the national project. Regardless of all dissimulation to the contrary, this collective loyalty is never divided against other Judaics in favor of gentiles.

“Running a modest 246 pages, the table of contents for Chapter III and its subheadings takes up that peculiar topic which mysteriously transforms the Anglophone lions of Catholic trad-servatism into harmless little <s>synagogue</s> Church mice. Section three is most pertinent to this post.

“Fittingly per the above, the only online English translation of the book was its table of contents. The rest remains in its Spanish original, available via download at this site’s Gateway Reader Page. Non-Spanish speakers attempting to translate with Google beware: the document is an imaged .pdf, meaning that there is no copy/paste function available. The only conceivable solution was to manually enter the Spanish text, copy into the translation page and then tease out the English meaning through the sometimes awkward English rendering of Spanish idiom. Motivation was found in the certainty that I had a source that neither the conciliar Christian-kabbalists nor their Judaic slave masters could keep from me a moment longer.…

One can be conscious that to speak of the Jewish subject, and especially if one alludes to it without praise is a taboo subject. You have to start calling things by their names, say that in the mind of Escriva de Balaguer there was Jewish thought, that Escribá – which was his real first name – was a crypto-Jew and that it is not possible to understand his work or interpret it if it is not related to the essential phenomenon of its interior and exterior Judaism.

In the biographies of Escriva de Balaguer we miss three essential elements of his nefarious personality; three basic facts are disguised to understand the man and his Work: Escriva was Jewish, that he was a homosexual and that he created Opus Dei to serve the ends of the hidden and sinister Jewish power, never for the greater Glory of God and of his Church. Escriva uses the Church and not vice versa. [Escriba, Josemaria; Opus Judeo; Impreso Orion en Editores; 1994; p 175-176.]

Most ambitious of all [Opus Dei] is attempting to secure key positions in the government of the Church… The personal prelature will allow Opus Dei to spread everywhere ignoring the local bishops. It denies this but its record in telling the truth is poor. Its members will now be even less protected by the Church than they have been, and Opus Dei is one step closer to becoming a sect. Should it gain control over key organs of government of the Church, the spirit of the Vatican Council will be gravely threatened, as also will be the unity and moral integrity of the Church.[Opus Dei Awareness Network;  http://www.odan.org/tw_inner_world_of_opus_dei.htm; URL accessed 30 December 2017.]

“Opus Dei exemplifies a dynamic of our ongoing catastrophe that no Catholic opinion shapers are willing to realize. Like on a merry-go-round, we revolve over and over again to the same points in the circle. Point one: prelate in Rome or major Catholic See scandalizes with his words or deeds. Point two: hue and cry is raised by those few Catholic pundits who still care about the Faith. Point three: same online tribunes, correctly and insofar as they understand the problem, demand action. Point four: conservative, controlled opposition engages in empty posturing.  This whole dynamic ought to make obvious to us that there is something we’re missing here; and that whatever we’re not getting is fundamental to the true nature of the problem; and that no one in the clergy, or online punditry can explain it. The failure to see the underlying cause leads to the failure to explain. Frustration turns to exasperation as the cycle repeats.

“When conditions in the world devolve into ever-deepening depravity, bad Catholics are at the root of the matter. Few would deny this.  What is denied is the reality that bad Catholics have non-Catholic helpers in being led further astray, and at the dawning of 2018 A.D. this anti-Catholic help comes from within the Church.  We are afraid to acknowledge the sinister presence of crypto-jewry inside the Church, and this fear keeps us locked in a cycle of permanent nescience. Should the reality of crypto-jewry ever be broached in conversation, just watch as the counterpart takes on the countenance of one who has been lobotomized. Not only won’t they speak out on the topic, many are afraid to listen. Still more have been programmed, and stupidly relish their regular grog rations of propaganda from their favorite Hollywood, media, alt-right, or conservative opinion dispenser.  Almost all thinking on the topic is captive to the public square’s invisible synagogue, and many act as if they fear expulsion therefrom. Simply put, as long as Catholics keep avoiding the question of crypto-jewry’s vast, patiently developed and fully structured infiltration into the Church, then the crazy train will continue on its circular track, while friends leap in desperation from its windows into sedevacantism. While it is apparent that Our Lord’s permissive will has given the devil much power and time to exercise his claim that he can destroy the Church, we might at least find current events less vexing if we properly understood cause and effect. So if we don’t want Sunday sermons explicitly sourced to the kabbalah (yes, it’s already happening), we might want to get eyes on this problem.  Opus Dei is far worse than a Trojan Horse within the gates. Although well inside the walls of Ecclesia Militans, it’s more like a huge, crypto-judaic siege-engine built to pulverize every Catholic structure still defended by rag-tag royalists.” 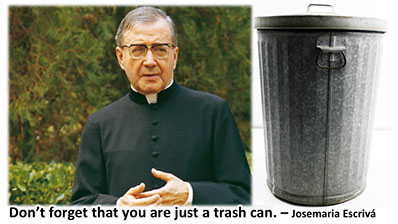 OpusDei has as its core doctrines themes taken almost verbatim from the Baal Shem Tov (aka  Israel ben Eliezer; Besht).

”Rabbi Angel Kreiman recently contended that Josemaria Escriva's teachings are strongly rooted in Talmudic traditions about work. Kreiman, who is the international vice president of the World Council of Synagogues, made his remarks in an address to a congress in Rome on Opus Dei's founder.…The Rabbi, who is a Cooperator of Opus Dei, said he wanted to demonstrate his special affection for the organization founded by Josemaria Escriva. ‘Opus Dei members helped me, right from the beginning of my seminary studies, to persevere in my vocation,’ he said, ‘and I have also seen them do it with other rabbis, for which I am deeply grateful.’”

Sol A. Rosenblatt was was Chief Counsel to Opus (Ju) Dei.

A Response to E. Michael Jones with Follow-Up Questions by Randy Engel (10 July 2017) 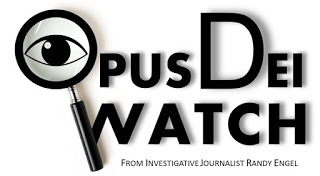 The Strange Case of Archbishop Nienstedt – Part One (30 August 2018)

Sexual Assault of a Child is a Crime! Don’t You bastards Understand That! (17 October 2019)

Knights of Columbus Dump Crux: Who Picked up the Slack? Parts 1-4

The Tactics of Opus Dei • Testimony of Eileen Johnson – Ex-Numerary

“…Opus recruits some students at a very young age when neither the parents nor the child are aware that the young student is being groomed for future membership by Opus. This is a dangerous situation that deserves more attention by Vatican authorities.…”