Pharisees • “it don’t say ‘purgatory’ in the Bible”

The word “purgatory” comes from the Latin “purgare,” to purify. These verses cited here refer to “purifying,” “cleansing,” and the need of the dead for our prayers. Please keep in mind a simple concept: the Old and New Testaments were written in Hebrew, Aramaic, and Greek—not English.

That temporal punishment is due to sin, even after the sin itself has been pardoned by God, is clearly the teaching of Scripture. God indeed brought man out of his first disobedience and gave him power to govern all things (Wisdom 10:2), but still condemned him “to eat his bread in the sweat of his brow” until he returned unto dust. God forgave the incredulity of Moses and Aaron, but in punishment kept them from the “land of promise” (Numbers 20:12). The Lord took away the sin of David, but the life of the child was forfeited because David had made God’s enemies blaspheme His Holy Name (2 Kings [2 Samuel] 12:13-14; see also). In the New Testament as well as in the Old, almsgiving and fasting, and in general penitential acts are the real fruits of repentance (Matthew 3:8; Luke 17:3; 3:3). The whole penitential system of the Church testifies that the voluntary assumption of penitential works has always been part of true repentance and the Council of Trent (Sess. XIV, can. xi) reminds the faithful that God does not always remit the whole punishment due to sin together with the guilt. God requires satisfaction, and will punish sin, and this doctrine involves as its necessary consequence a belief that the sinner failing to do penance in this life may be punished in another world, and so not be cast off eternally from God.

We refer you to the Bible that nothing unclean enters Heaven:

“There shall not enter into it any thing defiled, or that worketh abomination or maketh a lie, but they that are written in the book of life of the Lamb.”

Cleansing and purification are necessary. Purgatory is a temporary state of purification for those who have died in a state of grace, but who still have lingering imperfections that warrant cleansing (e.g., venial sins, earthly attachments, self-will).

Notice that even in the Old Testament it was taught to pray for the dead. If the deceased went to hell for an eternity, why pray? Those in hell cannot be helped. If the deceased went directly to heaven for an eternity, why pray? Those already in Heaven do not need our help. So, why pray for the dead? Because those who die in a state of grace, still need to be cleansed.

Purgatory appears in both the Old Testament and the New Testament. The verses do not literally say “purgatory,” but the verses speak of the need to pray for the dead for their cleansing and purification, of being “in the dark” until God brings the dead “into the light,” the need for perfection, etc.:

“It is therefore a holy and wholesome thought to pray for the dead, that they may be loosed from sins.”
2 Maccabees 12:46

Catholics do have an advantage because we believe the Bible, including 2 Thessalonians 2:14: “Therefore, brethren, stand fast; and hold the traditions which you have learned, whether by word, or by our epistle.”

Yes, the Bible commands you to observe not just the written word, but also the authentic oral Apostolic Tradition. So, while those verses do not contain the English word “purgatory,” they most definitely teach that the dead need our prayers during the time of their purification in Purgatory before entering heaven.

“…Various manifestations of souls from Purgatory to saints and mystics, however, prove beyond reasonable doubt that the physical nature of the suffering in Purgatory is real and it is much more intense than anything one can imagine in this world.

“A visible reminder for the living

“Fr. Shouppe relates that Teresa Gesta, a religious of the Franciscan Sisters in Foligno, Italy, who had served many years as a mistress of novices and was a model of fervor and charity, died suddenly on November 4, 1859, of a stroke of apoplexy. Twelve days later, the soul of Teresa appeared to Sister Anna Felicia in the sacristy of the same Convent. Sister Felicia described it:

Mark of the hand of Sr. Teresa GestaFrom the Franciscan Sisters of the Cross in Foligna 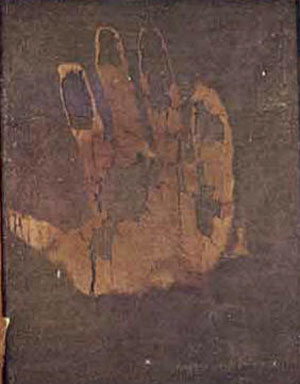 ‘Then the room was filled with a thick smoke, and the spirit of Sister Teresa appeared, moving towards the door and gliding along by the wall. Having reached the door, she cried aloud, ‘Behold a proof of the mercy of God.’

“ ‘Saying these words, she struck the upper panel of the door and there left the print of her right hand, burnt in the wood as with a red-hot iron. She, then, disappeared.’ (Purgatory Explained, Fr. F.X. Schouppe, p. 55)

“Because of this apparition, Teresa Gesta’s body was exhumed, and the hand of the deceased, remarkable for its especially small size, fit perfectly into the impression mark. All of this is well documented. If one were to visit that Convent’s chapel today, he would find that very handprint on the upper panel of the door.

“Such a demonstration should help alleviate the skepticism of those who find such stories to be ‘fantastic’ or even ‘fanatical’ and, therefore, not worthy of belief. Since this apparition, as well as other visitations of suffering souls, took place in the 19th century, this should counter the tendency to view these stories as ‘medieval’ or something out of the so called ‘dark’ ages.…

The Physical Suffering of Purgatory